Enjoy a wonderful space view on our beautiful planet earth. Believe in real life and true nature in all forms, care and respect all lifeforms. #love

Planet Earth from Space – ISS May 3 – 2015For those who have seen the Earth from space, and for the hundreds and perhaps thousands more who will, the experience most certainly changes your perspective. The things that we share in our world are far more valuable than those which divide us. – Donald WilliamsI really believe that if the political leaders of the world could see their planet from a distance of 100,000 miles their outlook could be fundamentally changed. That all-important border would be invisible, that noisy argument silenced. The tiny globe would continue to turn, serenely ignoring its subdivisions, presenting a unified fa – ade that would cry out for unified understanding, for homogeneous treatment. The earth must become as it appears: blue and white, not capitalist or Communist; blue and white, not rich or poor; blue and white, not envious or envied. – Michael CollinsRaw photos courtesy of Nasa ArchiveOriginal timelapse video by Riccardo Rossi (ISAA) – Attribution-NonCommercial-ShareAlike 4.0 International License 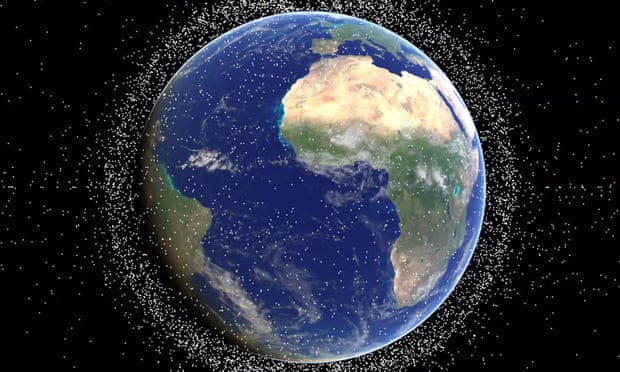 New satellites could lead to catastrophic collisions with space junk orbiting Earth. http://www.mirror.co.uk/science/hundreds-new-satellites-could-lead-10246413
A real danger for communication systems, also on Earth! If there will come a big crash, our internet, smartphones, GPS and military systems will fail or don’t work in worst case. The time to act is now! Each new launch must be clean without creating waste parts and space companies should remove first parts of space debris before they launch new satellites – or shortly after they launched! All companies, peoples or nations caused space debris must pay compensation, remove or dissolve their space debris. There should be new or better space laws to regulate all these problems. We developed and presented many solutions to dissolve or to remove the space waste during the last years. Read more on the project pages! Satellite Apps Network, Interplanetary Internet and Solar System Internet.

“Climate change is the challenge of our generation, and NASA’s vital work on this important issue affects every person on Earth.”—NASA Administrator Charles BoldenEarth’s 2015 surface temperatures were the warmest since modern record keeping began in 1880, according to independent analyses by NASA and the National Oceanic and Atmospheric Administration (NOAA).Globally-averaged temperatures in 2015 shattered the previous mark set in 2014 by 0.23 degrees Fahrenheit (0.13 Celsius). Only once before, in 1998, has the new record been greater than the old record by this much.This color-coded map displays a progression of changing global surface temperature anomalies from 1880 through 2015. Higher than normal temperatures are shown in red and lower than normal temperatures are shown in blue. The final frame represents the global temperatures 5-year averaged from 2011 through 2015. Scale in degree Celsius.More multimedia:http://climate.nasa.gov/resources/graphics-and-multimedia/

This color-coded map displays a progression of changing global surface temperature anomalies from 1880 through 2015. Reduce human-made and other negative climate change before it’s to late for us all. #globalwarming #climatechange #planet #earth

A breathing planet, off balance

A breathing planet, off balanceEarth’s land and ocean currently absorb about half of all carbon dioxide emissions from the burning of fossil fuels, but it’s uncertain whether the planet can keep this up in the future. NASA’s Earth science program works to improve our understanding of how carbon absorption and emission processes work in nature and how they could change in a warming world with increasing levels of emissions from human activities: http://climate.nasa.gov/news/2364/.

Climate Change and Climate Reality: http://on.fb.me/1Mn7FOY
Everyone can change something for a better future. Be care and share

The future of the Internet will be here 🙂 http://www.interplanetary-internet.com
Although I am poor or haven’t much money, but countless ideas that no one or anything can take away from me. If you really want to have something of my ideas or really use them you have to ask me and possibly even pay something for. If you want to expand internet in space and change games into better ones you can’t ignore me and my projects..